Tony’s Day in Dauin The three of us enjoyed the afternoon in Dauin, Pronounced ‘Dawin.’ It was a toss-up on who would have the less comfortable, back seat on the pedi. I moved fast to take it, thus displaying my male gallantry. I have to be most assertive on these matters as Daisy goes out […]

The three of us enjoyed the afternoon in Dauin, Pronounced ‘Dawin.’ It was a toss-up on who would have the less comfortable, back seat on the pedi. I moved fast to take it, thus displaying my male gallantry. I have to be most assertive on these matters as Daisy goes out of her way trying to ensure I am comfortable at all times; she being the more suited to rough-it she appears to feel. Miranda joins the battle. It is she who must have the less than desirable seat, we two must sit together. But I win – this round at least.

Mike’s place, as it is known, is a pleasant resort-style location sandwiched in among a dozen or more similar establishments that line the Negros coast north and south of Dumaguete. Mike’s is reputably the best when it comes to diving excursions be they scuba or snorkeling. I’m in no position to compare but in any event we are not set on doing any diving today. As we motor I reflect that it must have been 1969 when I last dipped a toe in a warm ocean. It was during my early days in Durban at a time I was in hot pursuit of Lynn, the last girl I would chase before Imelda happened by. Our group of eight had travelled north to Umdloti. I got carried out to sea that day and the remaining seven thought they had seen the last of me. But that’s another story. The owl had yet to call my name and I lived to hoot another day. (Sorry about the mixed cultures there.) While I have been close, even walked the warm beach of Durban since that time, I had not indulged.

Turns out this part of the coastline is not the best for gentle swimmers. The sea can be quite rough and there was a strong south-bound current. I would have relished it back in the day, even thought it a bit tame compared with the ocean rollers that I used to love to dive into; but that was then and this is now. In my later years I prefer a gentle tide.

I was the first to sample the waters off Dauin even so. The sand was gritty and unkind to my tender feet, not like South African beaches at all. Up to my waste and the current pulled me off my feet and I found it near impossible to stand. Nonetheless the girls joined me. We pranced and splashed and laughed. That is until a near disaster.

Miranda had gone ashore for the moment. Daisy (who has only learned to swim since my teachings in the pool,) and I were chasing each other around in the way one does. Out of nowhere I heard a cry of alarm calling urgently. I whirled to find the source only to focus on a 25’ catamaran under full sail bearing down fast on the two of us. I’d had no idea anything like that was anywhere near. Instant response was to grab Daisy and try to swim out of its path but it all happened so quickly. We had no purchase with this current. The boat was now so big it must surely hit us. But on the boat the man on the tiller had also been alerted by his crewman up front and must have yanked hard to port. Like the Titanic taking forever to turn, in the milliseconds that must have passed it seemed like this small boat was taking an age too. But before there was any time left to think the boat swept by with two or three feet to spare and, racing for shore as it had been doing, climbed the sand dune under its own momentum until all but a few inches was out of water.

After that I took a studied look round to see if there was anything else heading in our direction.

It’s been a lot of fun since Miranda arrived. The ladies are such good friends and their conversation appears to be one long funny story with near constant laughter. I love it. We bought a cake in recognition and of course today’s trip was in honor of the occasion. Right now it’s 8:30pm and they’re in the pool.

On the way home form Dauin,I beheld this classic Philippine sight. Between pedi-cabs, and single seat motor cycles many of which are in the business of being two wheeled taxis, it is routine to see sites that would earn the enmity of Canadian or American law. On the way home today was an eye opener. Drawing up alongside us was a motor bike piloted by a young mum and a teenager riding pillion behind her. In front of the mum was perhaps a three year old, gorgeously pretty little girl. She was standing on the fuel tank and holding herself in place with her two hands placed on the handlebars at the center point where left and right meet. The little girl reminded me so much off Anastasia, for those who recall the gorgeous little mini Sonnen who was at Imelda’s celebration of life along with mum and dad, Natalie and John. Anyway the real kicker was not so much that she was traveling the way she was but, rather than hanging on for dear life, she was looking around as nonchalantly as you can imagine, hair streaming in the breeze. Her eyes came to rest on mine briefly as I gazed in wonder at her. “Well, how else do you expect me to get around?” she might have been saying.

Sorry Steve, no helmets either.

If you were to assume that being in this sunny clime I would spend much of my time tanning, you would be incorrect. I have passed such time for a single half hour, just yesterday, after emerging from the sea. But I am as tanned as I’ve ever been already. You just get that way living here. For one thing it’s just too hot – not to say unwise, to spend time tanning. And of course you just don’t need to. I’ve got Daisy already complaining, “Whatever happened to the white boy I hooked up with?”

Enjoy the photos of my day in Dauin 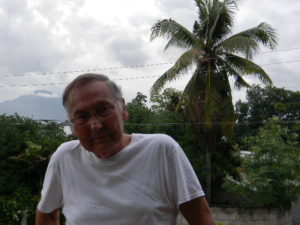 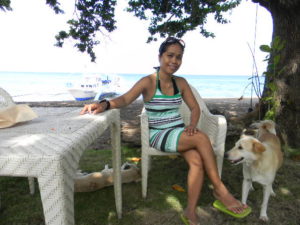 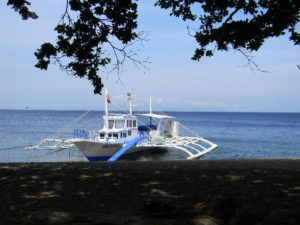 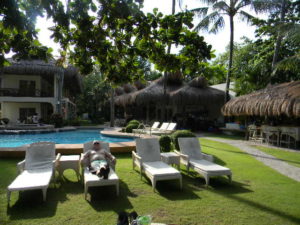