Motorcycles in The Philippines Not What a North American is Used To Motorcycles in the Philippines are part of everyday life for the majority of both Filipinos and Foreign Expats. They are everywhere and take many different forms. You have the automatic scooters which are light and uncomplicated to drive, street-trail hybrids such as the […]

Motorcycles in The Philippines

Not What a North American is Used To

Motorcycles in the Philippines are part of everyday life for the majority of both Filipinos and Foreign Expats. They are everywhere and take many different forms. You have the automatic scooters which are light and uncomplicated to drive, street-trail hybrids such as the Honda XRM or XR which are easy to use on the street but are more resilient on the off road paths that alot of Filipinos must traverse to get to their homes, the standard 4 speed semi-automatic street bikes and then the larger full street bikes that more resemble what we would see in the North America. The most glaring difference between motorcycles in the Philippines and those in North America is size. Almost every motorcycle in the Philippines will be between 100 and 250 ccs, with a larger bike being a rare oddity that garners ews and ahs and many jealous, but respectful looks. Though I am fully used to the size of the motorcycles in the Philippines, sometimes I think about if I had a bike like this back in Canada. First off, it would not be considered legal on most roads, but even if it were, I would not be caught dead on one. I imagine the looks pulling this little “minibike” up to a stop light and shudder at the outright laughter I would hear from the occupants of the vehicles next to me. I am not particularly insecure or spend too much time caring what other people think, but I doubt I would want to face the constant ridicule driving a bike like this in Canada.

Putting aside for a minute the differences of the actual types motorcycles in the Philippines compared to North America, what is even more dissimilar is how they are ridden. In North America if you get on a motorcycle, you dress for safety. That includes a helmut of course, but also the proper clothing to ensure the least amount of injury should you lay the bike down. Here in the Philippines helmuts are not mandatory in all jurisdictions (rarely worn in Dumaguete City) and proper protective clothing is even less typical. Sandals, shorts and a t-shirt are. Then there is the loading of a motorcycle in the Philippines. In North america, you will NEVER  see more than two people on a bike, but here it is common to see 3-6, plus maybe a goat, pig, bag of rice or a few chickens. The worst part is usually a few of those passengers are children ranging from newborn to several years old!!! Just imagine that in North America.

And I guess I have to end with the one behavior on a motorcycle in the Philippines that just make me stare in awe and amazement. Texting while driving. Texting while driving is a huge enough concern in North America to have caused laws to be written prohibiting it, but hey, we are talking 4 wheeled vehicles there. How anyone can focus on the road and  manouver a two wheeled motorbike, while looking at a 3 inch screen and punching the buttons of the keypad is beyond me, but something I hold in awe. As soon as I pass them so they cannot involve me in the crash that must be coming! 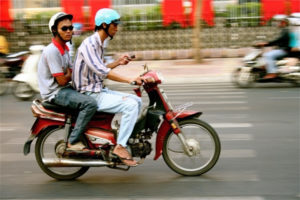