Ferry Travel In The Philippines Is it safe? If you are coming to the Philippines and have done even a minimal amount of research, you will know that ferry travel is likely to be a part of your itinerary if you wish to stray any distance outside of Manila, and an essential part if you […]

Ferry Travel In The Philippines

If you are coming to the Philippines and have done even a minimal amount of research, you will know that ferry travel is likely to be a part of your itinerary if you wish to stray any distance outside of Manila, and an essential part if you want to visit one or more of the islands which constitute the raison d’être for most visits. Oh, how wonderful that can be! Sailing along in a brilliantly painted bangka, sheltered from the sun, with the blue sea splashing against the sides. I have enjoyed that from the short transit to Puerto Gulera in the north to El Nido in the south-west.    But you will probably also know that the Philippines has an unenviable reputation as far as ferries so.

So it is worth asking: What is the truth about ferry travel? Or, as the more pessimistic might put the question: Just how risky is the situation?

To get the bad news out of the way first, much of what you have heard about ferry travel is true. For starters, the country has the unwelcome distinction of having had the world’s worst peacetime maritime disaster. This occurred in late1987 when the super sized MV Doña Paz collided with an oil tanker near Marinduque island, south of Manila, and over 4,000 passengers drowned. But there had been many deadly serious disasters before this infamous sinking and there have been many since, seemingly at least one or two each year.
The year 2008 was particularly bad, the calamities including, in June, the huge MV Princess of the Stars capsized off the coast Romblon, near where the MV Dona Paz went down and over 1,000 passengers drowned,  and a few months later that same year, two smaller, motorized bancas capsized: the MB Jen-Mar, near Cagayan, north of Manila, and 87 passengers drowned, and the MB Don Dexter, off Masbate, again near the Dona Paz site, saw 52 drowned.
More recent mishaps invloving ferry travel include: in August 2013, the 700 passenger MV St. Thomas Aquinas, collided with a cargo ship just as it was approaching its Cebu city berth,  and over 100 passengers drowned, while just last summer, the 178 passenger MB Kim Nirvana capsized just after it left Ormoc port and more than 50 passengers drowned. 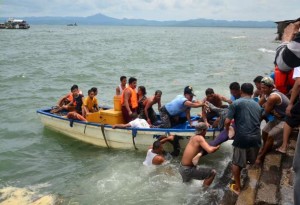 Terrifying, isn’t it? Hundred upon hundreds of innocent people, innocuously traveling from town to town, never making it, perishing instead in the unforgiving dark sea, creating a vision of ships sinking right, left and center, like some kind of catastrophic video game.
What the hell is going on? How can any country put up with such mayhem?.
To answer these questions, you have to first put the matter into perspective by noting the country’s geography.While it is marvelous for the Philippines to be able to brag to holidaymakers that it has 7,107 islands and countless beaches, this bounty means that the country also has an awful lot of water to deal with, which in turn means it has to make use of an an awful lot of ferries, ranging from dozens of super ships carrying thousands of passengers down to millions of flimsy canoe-like bancas, plying routes varying from a few dozen meters across a placid river to hundreds of miles on the open sea, with countless trips taking place day and night. The fact that these voyages take place without incident is not to excuse the disasters that do occur – even one sinking is one too many – but it does underline that a lot of ferry travel is safe.
As for the disasters that do occur, it is doubly saddening that most of them could be easily avoided. After every new disaster, the reports end with the same alarming phrases:
* “Many vessels are poorly maintained and are not equipped with safety gear” (the BBC, in 2003, after 55 went missing off Palawan
* “Sea accidents are common because of tropical storms and poor safety regulations” (the BBC in 2009 after 25 drowned south of Manila.
* “Overcrowding and accidents are common”, (said the BBC in 2000, after reporting that 74 passengers had drowned in an incident off Sulu island
You quickly begin to see a pattern: inferior vessels; bad weather; over crowding, the same triumvirate of factors that are responsible for shipping disasters the world over. For would be visitors, it is worth asking: Which of these factors is most responsible for accidents in the Philippines?
First, there is no doubt that Philippines ferries are not the most modern in the world. In all my years of travel in the country, I have never encountered a vessel that looked spanking brand new, in the way that many airplanes do, mainly because the Philippines takes a lot of its vessels from aging Chinese fleets. But this does not explain the high mortality rate on the seas. Even the worst of the country’s ferries are seaworthy despite their rust, and few if any of the disasters that have occurred have been due solely to equipment malfunction.
In any case, fortunately, the country’s fleets are improving dramatically. There are now as many as 100 big reputable ships in all. The largest fleet, consisting of some two dozen impressive craft, including SuperCat ferries, belong to 2Go, which is based in Manila but serves most of the major ports in the country. Other encouraging ferry names include the smaller fast crafts OceanJet (12) and Weesam (7), both based in Cebu and focused on routes in the Visayas, including the cities of Dumaguete, Bacalod, Iloilo and Ormoc.
The second factor to consider is the hen there is the nation’s highly variable weather, which has a penchant for unpredictable typhoons and other storms. Lifelong landlubbers in general and city dwellers in particular may think that coastal and inter-island sailing should be quite easy, despite such passing turbulence. Very often the distances involved are not long and modern systems allow for accurate forecasts – surely bad weather and rough seas can be avoided.
Alas typhoons and other sea storms are by nature unpredictable, rapidly changing in intensity and direction. More alarming still, innumerable bodies of water, even small small bodies, can quickly develop life threatening conditions, starting with dangerous waves, due to slight changes in wind, tides and currents.  But here too there has been progress: as the Philippines begins to field more modern craft, it is also developing more accurate forecasting and, equally important, more diligent warnings to ship operators. Already, if anything, the official bodies sometimes err on the side of too caution, leading to unnecessary cancellation but better safe than sorry.
Finally, thirdly, there is the human factor. On the positive side, Filipinos are naturally at home on the sea and the standard of the crew is invariably high. The actual operate of any one vessel is seldom the cause of accidents. These stem from another aspect of Filipino humanity: a penchant for overcrowding. If demand exceeds capacity – and it often does on popular routes –  officials both on shore and on the vessels have been known to turn a blind eye to passenger numbers. Indeed, in nearly every ferry disaster, there is some question over the load exceeding capacity, meaning that the vessel, even if seaworthy able to cope with adverse weather, is doomed. .
Fortunately the current administration’s wide ranging war against corruption has yielded results in many areas, including maritime travel, and in future there should be tighter Coast Guard patrols and, inevitably, a reduction in the number of maritime disasters so that one day soon the Philippines will not be the byword for ferry disasters that it is now.

What precautions should you take with Ferry travel?

In the meantime, there are various measures you can take to protect yourself. Even when you are feeling most relaxed on your holiday, it is worth casting a close eye over any vessel you board, and at least noting the location of the life jackets. Secondly, always be ready to alter your plans if bad weather is forecast. Always allow yourself ample time to get to any important destination and never, ever, fall prey to the belief that you have to get where you are going immediately despite weather warnings. Every year there are stories of tourists drowned because they insisted on being taken to some place because … “we have to get there to catch a plane.”
Above all, avoid overcrowding, which can often be easily done by traveling a few days early during busy holiday seasons.
Widget Area  |  Info: There are no widgets in selected area, add some please.
Loading…