Starting My Philippines Life Over What I Would Do Differently Here I am, 5 years down the road in my Philippines life, thinking back to how I behaved during my first year or two and wondering how I would do things differently if I was just arriving in the country now. It’s not that I […]

Starting My Philippines Life Over

What I Would Do Differently

Here I am, 5 years down the road in my Philippines life, thinking back to how I behaved during my first year or two and wondering how I would do things differently if I was just arriving in the country now.
It’s not that I have any reason to complain about my life at the moment. On the contrary, despite having made many missteps after first landing in the Philippines, I am happily married with a incredible one year old son and only have reasons to celebrate.
I am only pondering my early years because I feel so lucky to have gotten where I am, knowing that I made a lot of mistakes. Everyone arriving in a new country makes some, of course. But maybe if I confess to a few of mine, I can save you making the same ones I did.
Before I begin, I would suggest it is essential for anyone coming here for the first time with romantic inclinations to be very clear which of two opposing camps they belong to: are you coming simply for fun or determined to find a wife? Your purpose will radically define how you should behave to avoid mistakes. Frankly, I was not looking for marriage so the missteps I made are most likely to be replicated by foreigners mainly looking for fun, but the efforts I would make to avoid them if I was starting over should be useful for everyone.

Being Prepared for my Philippines Life

First of all, I would try harder to be prepared for being so popular, for there is no way to avoid the female adulation and if you are unprepared, it can overwhelm all rational thought – make you crazy essentially – and yet responding to it too quickly will only get you into trouble. Even if you have been moderately popular in your home country, the extent of the appreciation in the Philippines is likely to be staggering. The opposite sex, old or young, singularly beautiful or merely just pretty, is almost certain to be after you in a way you have never encountered.
This pursuit leads most newcomers into all kinds of mistakes, from getting into multiple relationships which make everyone unhappy to getting married within hours of arriving, which can work out for some but, more often than not, leads to disasters.
So if I was starting over again, I would devote a little time convincing myself that I am incredibly handsome, amazing company, unbelievably wealthy. In short, hard as it is for me to imagine it, that I am god’s gift to any woman – because that is how many girls are liable to think of you.

Secondly, I would spend as long as I could travelling around the country alone, learning about the place. It is generally agreed that it is easy to underestimate the Philippines because so many of its people speak English and there is a familiar American feel to things. But be forewarned, the country, the people, the government, the police, the religion, the food – everything about it –  is different in subtle but important ways which you would do well to understand.
If you bond with some girl straight off and spend too much time amusing yourself in her locality, you will never come to appreciate everything that the country has to offer. Certainly you will be hard pressed to find any girl to explain the landscape to you. Most Filipinas simply do not have a Westerner’s interest in their own country nor the opportunity to explore it so they are unlikely to have much knowledge of it to share with you.
Visiting the Philippines should be a little bit like getting a drivers licence in your home country – you would travel for some time with a provisional licence with restrictions imposed to allow you to master the basics. In the case of driving in England, learner drivers are prohibited from using the motorways. In terms of newcomers in the Philippines, they should be prohibited from getting engaged for at least three months.

Thirdly, once I had grown used to the girls’ adulation and learned enough about the country to feel like making a proposal and settling down, I would consider drawing up some form of pre-nuptial agreement. That may sound frightening but it needn’t be, as it doesn’t even have to involve writing anything on paper. The gist of it would be a simple understanding of one thing: the extent of your fiancee’s family’s needs.
The simple reality is that, unless you are utterly heartless, you are bound to want to help your fiancee’s family in some way, You almost certainly have more money than they do – probably a lot more – and it would be churlish not to treat them to a few things now and then. The key to happiness in this matter is to understand how much they might expect and how much you might be prepared to give.
Personally, I have been blessed with my wife’s relatives but I have encountered men who have been mired in nightmares, with various members of the extended family literally sitting on their doorstep in the morning waiting for a handout.
Even I have been surprised at the determination of some girls to separate foreigners from their loose money. The most outstanding example was a potential girlfriend who wanted to move her parents from their earthquake damaged Bohol home to the safety of Davao. I promptly put up 5000 pesos for their ferry tickets, only to find this same dutiful daughter on Facebook posting happy snaps of her enjoying a holiday that very day hundreds of miles away in Palawan with some other foreigner. Such exploitation is not a formula for a happy relationship.
There you have it, three small suggestions for your future Philippines life – be prepared to be chased by girls; be willing to learn about the country; be clear about possible familial commitments. Follow these tips and you should find that the Philippines is a little like Paradise on earth.
Obviously this advice is written principally for newcomers but if there is anyone reading it who has been around for awhile, I wonder if you ever think back to your first encounters of your Philippines life, and have ideas about how you might have done things differently?

A long time writer, Terence founded The British Film Magazine and later traveled the world eventually settling in Thailand for a number of years where he entertained his loyal readers with such books as Thailand Love Talk. For the past several years he has called the Philippines his home, married his sweetheart, Annalyn and became a first time father. 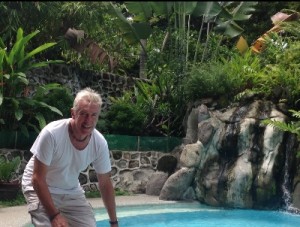