It’s Sunday, Valencia market day. The best day every week the regional farmers come to Valencia to hawk their wares. We were there by 8:15am. Pretty darn early it seemed to me for them coming from out of town and having to set up and all. But there they all were looking as entrenched as […]

It’s Sunday, Valencia market day. The best day every week the regional farmers come to Valencia to hawk their wares. We were there by 8:15am. Pretty darn early it seemed to me for them coming from out of town and having to set up and all. But there they all were looking as entrenched as if they were there all the time. Mind you, many of the stalls are simple hessian rugs with fruit and veggies spread thereon, no construction as such. We gathered extra supplies with Miranda arriving for her week-long visit this afternoon. It was interesting watching Daisy at work ever willing to negotiate. I have to hold Back so as not to cause a white boy rise in prices.

To get to Valencia market was an adventure. We stood outside our complex, baking in the hot, early morning sun. No pedi-cabs in site. Then we saw a Jeepney on its way. ‘Not good, not good,” says Daisy, “too full,” as we focus on the crowded roof. But the bus had just dropped one or two folks a hundred yards back and this driver was not going to forgo another couple of fares if he could get them. Lightning speed chatter between Daisy and the bus driver results in further tightening up of bodies so I could squeeze into what now became a four across front seat in line with the driver. Daisy stood on the back step with a number of males holding on to the metal handle for all she was worth. She absolutely wouldn’t hear of taking this ride the other way round – neither would the driver. The white boy must have the seat.

I pointed out tomatoes. A huge basket full of green tomatoes with a number of red ones dotted around here or there. I gave her a nudge so she would make her selection before the red ones were gone. But then she pointedly ignored the red ones and selected from the green. I opened my mouth to speak but then thought better of it. Pineapples there were aplenty. I’m so into pineapple juice these days and mangoes too, chilled ready for breakfast. Either them or papaya. The pineapple cost about $1.40 and for that we watched it skinned and cut ready to eat. The Valencia market produce is both fresher and way cheaper than the supermarket, the way it always used to be. 4 avocados $1:50. Whole papaya, 35c, 50c for 14 bananas, small ones it’s true, but still.

I’ve had to stay out of the pool the last 2 days. I did miss one day on account of the wounds from my fall but then I couldn’t resist the call the following day and went in. Bad move. Got some infection. If you know anything about living in the tropics you know how quickly infection sets in, typically manifest with septic sores that, if neglected, can turn to septicemia. Very important to pre-empt that. I got the wagging finger and am now behaving myself. The good part is I’m being nursed back to health – I like that! It would have been fine if I’d gone in the sea, it cleans. It’s the fresh water that did it.

Daisy and Miranda have arrived home from the airport. Tomorrow we’ll make like tourists and show Miranda around Dumaguete. Then Tuesday, the birthday, we’ll make for the coast and the beaches and have a fun day at the sea.

After breakfast was swim time then we hit town. Miranda allowed as Dumaguete is much nicer than Manila. Well, she should know. I don’t get though that Manila is noisier than here – nothing is noisier than here. Among other things we reviewed the anthropological museum on the Silliman campus. Learned a thing or two about Philippine history. Bit checkered like everyone else’s but it was mainly the Spanish and the Americans who messed things up for this lot. Hell, they even had their own version of a Louis Riel type, chap named Rizal. Didn’t like him back in the day, bumped him off like the Canadians did with Riel. Now he’s a hero, Rizal that is.

We were going to try the fried ice cream that Pando’s is famous for, but somehow we didn’t. ‘Nother day p’raps 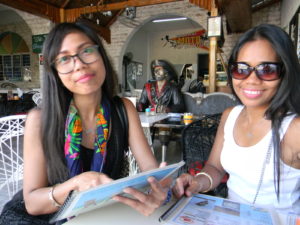