We are seated at a table for four, this Asian lass and I. We are in Casablanca. Not the Casablanca you understand but another spot on the planet that boasts the name. A restaurant in fact that, alas, does not have Sam playing for us tonight, there is no sign of Rick (I suppose he […]

We are seated at a table for four, this Asian lass and I. We are in Casablanca. Not the Casablanca you understand but another spot on the planet that boasts the name. A restaurant in fact that, alas, does not have Sam playing for us tonight, there is no sign of Rick (I suppose he is hidden away sweet talking Major Strasser), Daisy stands in for Ilsa and Captain Renault is not in evidence although his security guards are omnipresent. We order a Philippine delicacy the appearance of which, when it arrives, creates doubt. Mindful of the lads standing there supporting guns with ammo reminiscent of that found in field artillery I hesitate to comment in any but the most positive light.

The contrast between this Casablanca and the original is that, in the original it appeared as though one could hear each other speak. Such is not the case with this one. We are on the outdoor terrace at the waterfront, Rizal Boulevard, a pedestrian walkway and a seawall between us and saturation. Two foot waves plunge determinedly against the sea wall but for now anyway, they are resisted. But it is not the waves that drown our conversation. No. It is the traffic. So? my gentle city dweller may ask, what’s new about traffic?

Dumaguete must be the only city on the planet that enjoys an omniscience of pedi-cabs as the sole method of in-city public transportation. Pedi-cabs are motor bikes with a passenger cab that calls for a third wheel. The seating provides for four intimately acquainted North Americans or sixteen Filipinos and are rarely seen carrying less.  You may hire one as you would a taxi and seat the two of you, but somehow, along the route, if the machine so much as slows down from its cruising speed of 75 in these relentlessly congested streets, one acquires more riders along the way.

Motor bikes are noisy animals and Dumaguete must boast at least a hundred thousand pedi-cabs alone. They present rather like one of those nests of creepy crawlies where every miniscule of surface is covered with writhing activity. The 3” minimum of space between vehicles popular in Cebu is replaced here by the real estate concept of zero lot lines. Someone mentioned that the city is heaven for Hell’s Angels. They come here when they pass. It is readily apparent why. No one sees, or more particularly hears motor bikes like Dumaguetians. These pedi-cabs would I guess outnumber London taxis per capita by about one hundred to one. London at least has real buses in huge numbers, underground railways to absorb some of the crowd and suburban surface Railways to boot. In Dumaguete it’s pedi-cabs or nothing. Well, there are a few dozen or so Jeepnies but they are inter-urban not in-city. Of course, you’ll realize I am only talking public transportation. The population as a whole has attained an economy wherein the people (of independent means) who prefer their own transport also own bikes. So the gentle reader may wish to enhance his or her image of Dumaguete with a zillion pedi-cabs by tripling or quadrupling their number by independently owned motor bikes and motorized scooters. Try dodging that lot when you cross the road. It’s hardly any wonder Filipinos are so religious.

People who can still bend an arm, or a leg, or a back without hearing alarming cracks; people whose muscles rarely draw attention to themselves, they are just there working away; not burning in eternal agony. So, when you can no longer count yourself among the very young, pedi-cabs matter. I have invested in some stronger pain killers.

Today is moving day. My longest stay anywhere since January 30th has arrived. Daisy and I move into our digs this morning. We found this mini complex of three, garden apartments set in a horseshow shape with a pool in the middle. Of the several places we checked out this option has by far the most attractive designer interior and has a living room window with a view and a sliding door that leads out onto the grass and the pool. The pool is surrounded by truly pleasantly soft grass kept in trim by a Filipino gardener who tends it with hedge shears. The existing population of the complex consists of one Chinese person who is rarely in residence and a couple not unlike us, white boy from Portland and his Filipina wife. Most of the time we have the place to ourselves. The pool will be almost private. And we will be spending a lot of time in it as the water is beautifully warm. Here I shall enjoy some peace. Daisy, whose youth is such that she retains the flexibility required for pedi-cab transportation has instructed that I will remain home and relax while she rides the devils incarnate and battles the vendors in the local Valencia market for vegetable and fruit prices not attainable with a white boy present. Works for me.

And now you’ll excuse me while I awaken my exceptionally tanned princess. We must break our fast and pack. 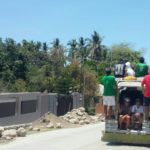 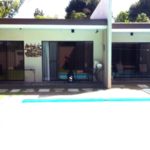 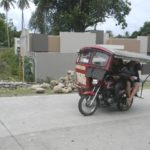 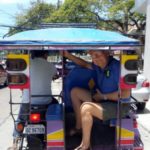 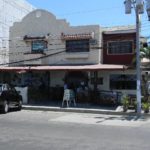 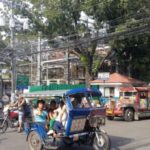 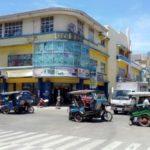 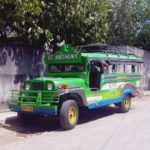